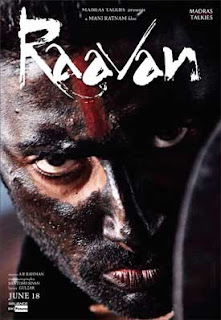 Raavan (Hindi: रावण) is a 2010 Hindi film directed and co-written by Mani Ratnam.
It stars Abhishek Bachchan, Aishwarya Rai and Vikram in the lead roles while Govinda, Ravi Kishan, Nikhil
Dwivedi, Tejaswini Kolhapure and Priyamani feature in key supporting roles. It was simultaneously released in Tamil as Raavanan with a slightly different cast, which would also be dubbed into Telugu and other regional languages. The film's score and soundtrack is composed by A. R. Rahman.
The film was released on 18 June 2010. The film's premiere was held in London on 16 June 2010.
Plot 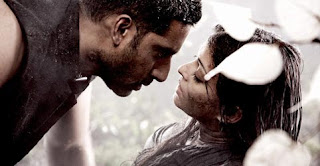 The film is a modern-day version and a loose adaptation of the Indian epic Ramayana, in which Sita, the wife of Lord Rama, was abducted by the demon ( Rākshasa) king of Lanka, Ravana. Cast Abhishek Bachchan as Beera Munda Aishwarya Rai as Ragini Sharma Vikram as Dev Pratap Sharma Govinda as anjeevani Kumar Ravi Kishan as Mangal Priyamani as Jhamuniya Nikhil Dwivedi as Inspector Hemant
Tejaswini Kolhapure as Dulari Ajay Gehi as Hariya Production Shooting began in the southern part of umkur , Karnataka at the end of October 2008. During filming, Mani Ratnam became ill which delayed the filming for a few months in 2009. However, the film began its last schedule in August 2009. The film finished filming and went into post production by October 2009. Manikandan was hired as the
film's DOP or cinematographer. However he was replaced in early 2009 by Santosh Sivan. This film have numerous action scenes and stunts performed by the actors. The stunts are directed by Mani Ratnam and are
choreographed by Peter Hein, who received Filmfare action award for the Hindi version of Ghajini and Anniyan. The Kerala martial art Kalarippayattu is also featured in the film. Dancer Astad Deboo choreographed a passionate chase scene and tandav dance between Abhishek and Aishwarya for the film.Indian fashion designer Sabyasachi Mukherjee designed Aishwarya Rai's costumes in the film.Raavan has been shot in numerous locations around India including the forests of Karnataka (Tumkur), Kerala Athirappilly Falls.Ooty, Jhansi, Kolkata, Mahabaleshwar and in the Malshej Ghats in Maharashtra.Critical reception
Posted by share at 11:41 AM No comments: